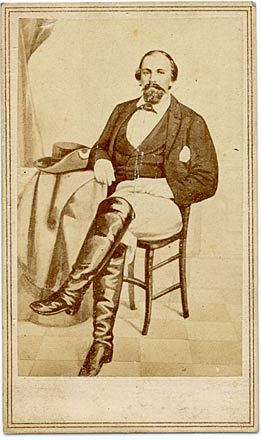 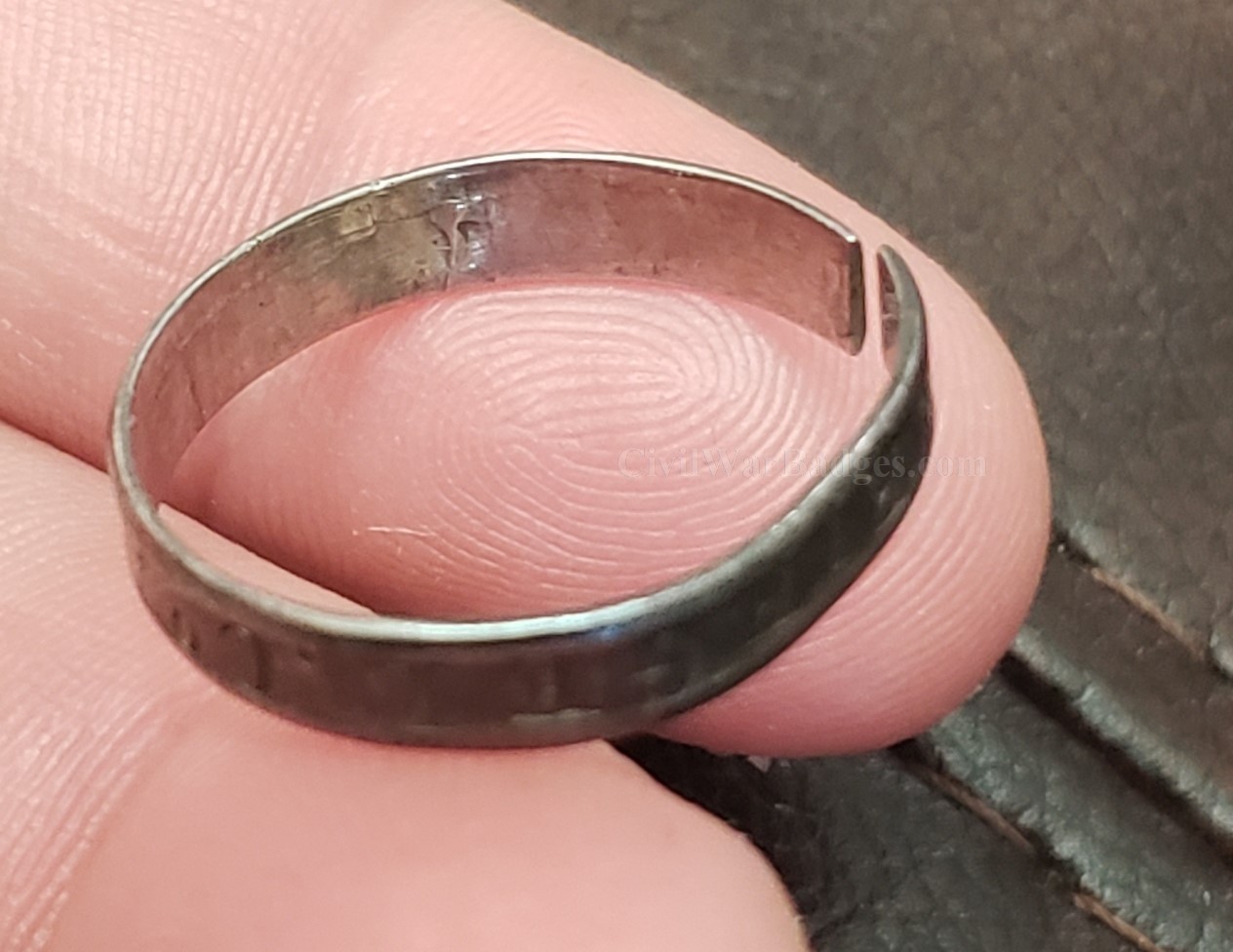 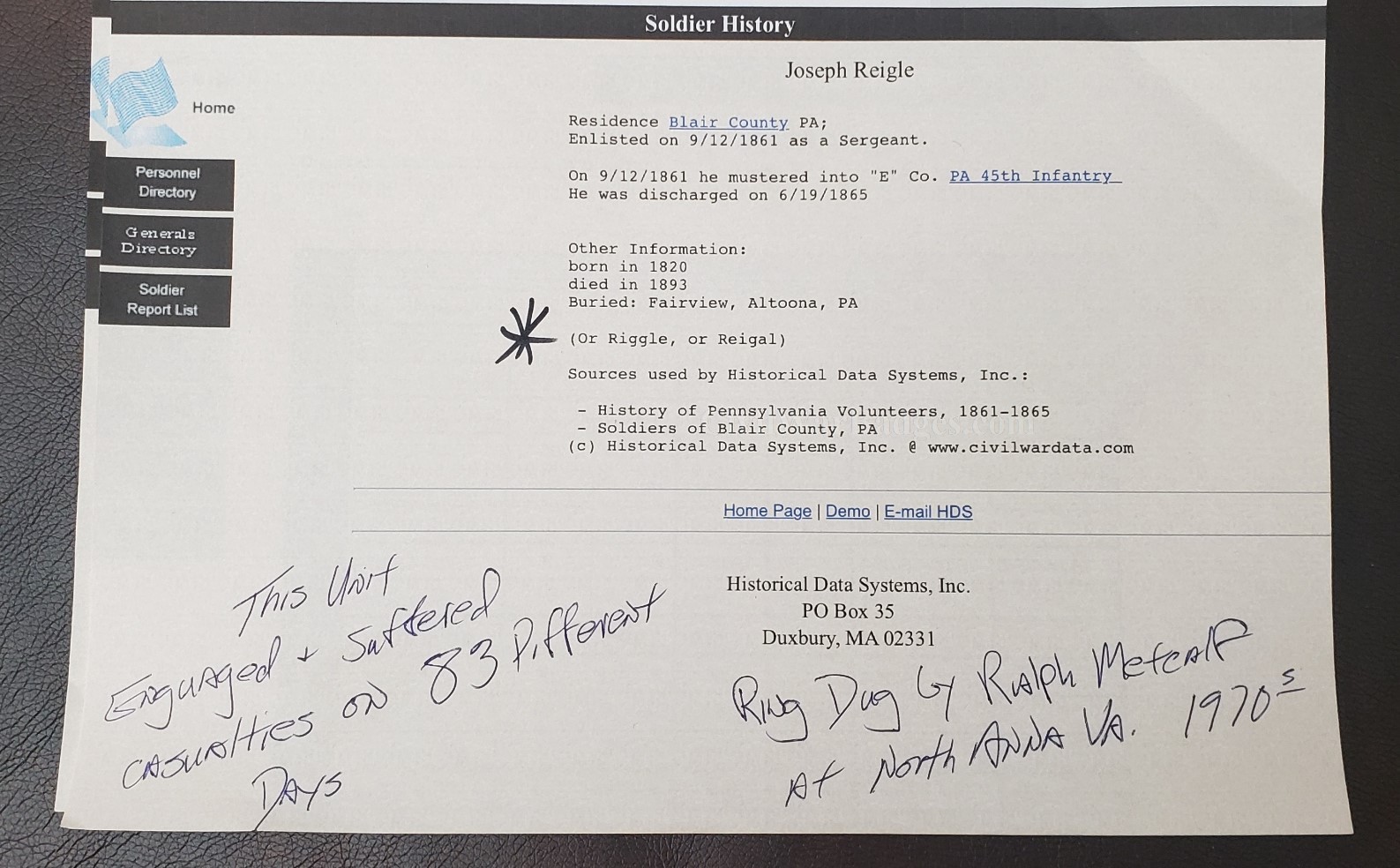 INFO THAT CAME WITH THE RING STATES IT WAS DUG BY RALPH METCALF AT NORTH ANNA, VIRGINIA, IN THE 1970'S ~ THIS REGIMENT WAS IN NORTH ANNA IN MAY OF 1864.

Forty-fifth Infantry.-Cols., Thomas Welsh, John L. Curtin; Lieut.Cols., James A. Beaver, John I. Curtin, Francis M. Hills, Theodore Gregg, Majs., J. M. Kilbourne, John I. Curtin, Edward A. Kelsey, Theodore Gregg, John F. Trout. The 45th regiment, recruited in the counties of Center, Lancaster, Mifflin, Tioga and Wayne, was mustered into the U. S. service for a three years, term, Oct. 21, 1861, at Camp Curtin, Harrisburg. Arriving in Washington on Oct. 23, it was assigned to Howard's brigade, Casey's division and went into camp on the Bladensburg road. On Nov. 19, it embarked for Fortress Monroe, where it remained at Camp Hamilton until Dec. 6. It then sailed for Port Royal, S. C., where it occupied Bay Point, Otter and Fenwick Islands. Six companies were stationed on North Edisto island in May, 1862, and on June 1, three companies were sent to John's island. The remainder of the regiment, with the exception of the companies stationed at Bay Point, followed to John's island and on the 9th, the command sailed for James island near Charlestown, where it shared in the engagements and then returned to Hilton Head. Here the regiment was reunited and embarked for Fortress Monroe on July 21, encamping on its arrival near Newport News. Early in August, with the 1st brigade, 1st division, 9th corps, nine companies moved to Brooks, station and returned to Acquia creek, destroying railroad property and commissary stores. On Sept. 6, it embarked for Washington, joined the Army of the Potomac and participated in the battle of South mountain, but was held in reserve at Fredericksburg. The 45th was in camp at Falmouth until Feb. 12, 1863, then at Newport News until May 22, when it was ordered west. It arrived at Jamestown, Ky., on June 1, but was at once obliged to continue its journey to Vicksburg. It was posted at Haines, bluff, and from there joined in the pursuit of the foe to Jackson: Returning to Vicksburg on July 21, the regiment embarked for Cairo, then proceeded to East Tennessee and was engaged at Blue Springs. It participated in the siege of Knoxville and the arduous pursuit which followed. In Jan., 1864, 426 members of the 45th reenlisted and were granted a veteran furlough but took the field again in May. In the Wilderness campaign, with the 1st brigade, 2nd division, 9th corps, the 45th engaged at the Wilderness, Spottsylvania, the North Anna river and Cold Harbor. It joined in the siege of Petersburg and in the assault of June 18, the 1st brigade was in the advance. Gen. Burnside's official report says: "No better fighting was done in the war than by the divisions of Potter and Willcox in this attack." At the attack on the Weldon railroad, the explosion of the mine and the battle at Poplar Spring Church, the conduct of the 45th was heroic. Corp. Frank Hogan of Co. A won a medal of honor for the capture of the flag of the 6th Va. in the action at the mine. In the many engagements of the summer the losses of the regiment were severe. At Poplar Spring Church the remnant of the troops were surrounded and after a desperate attempt to fight their way out were captured. With the addition of recruits the regiment participated in the action at Hatcher's run in Oct. 1864, and in the final assault on Petersburg, April 2, 1865. It joined in the pursuit, took part in the grand review of the Union army at Washington, and was mustered out at Alexandria, Va., July 17, 1865.