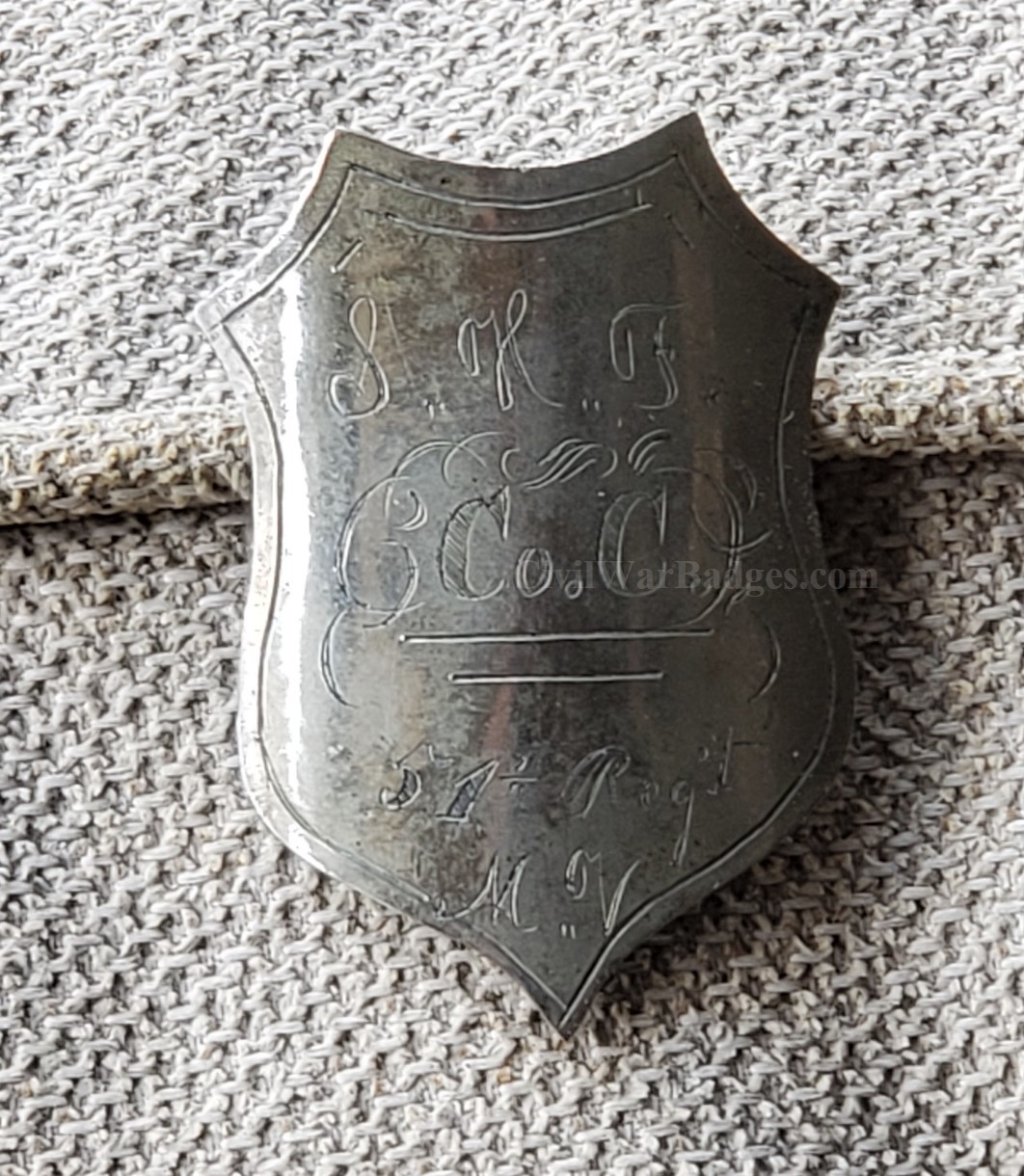 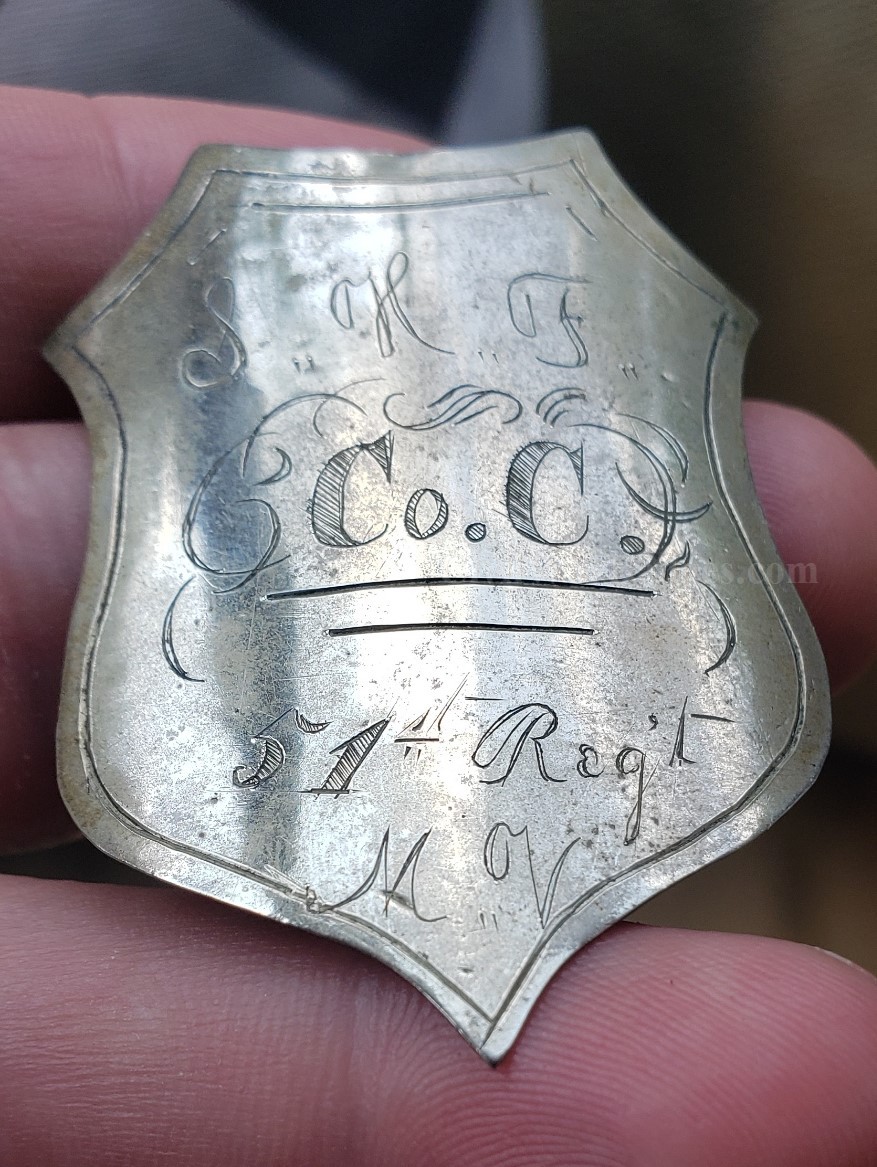 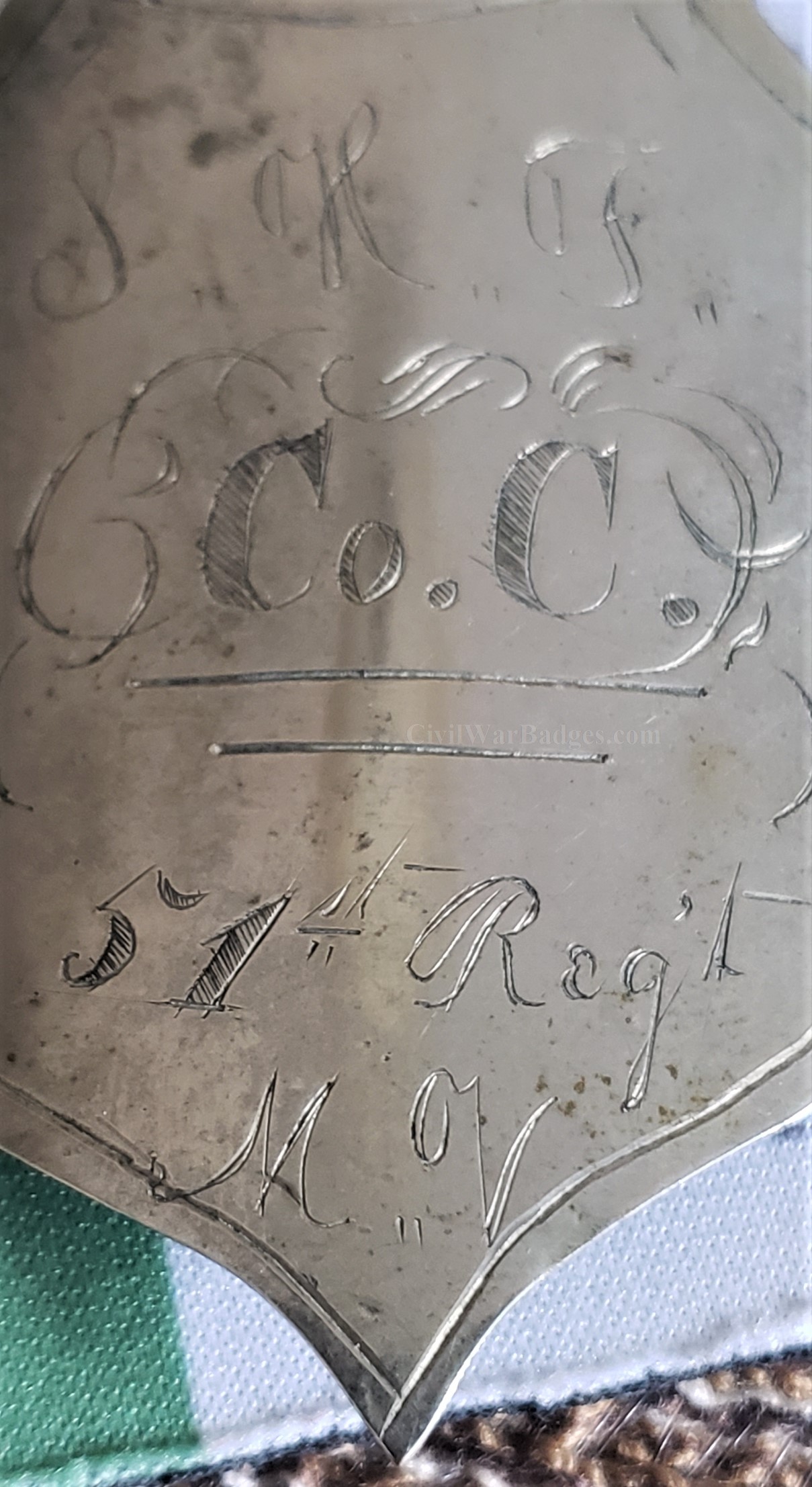 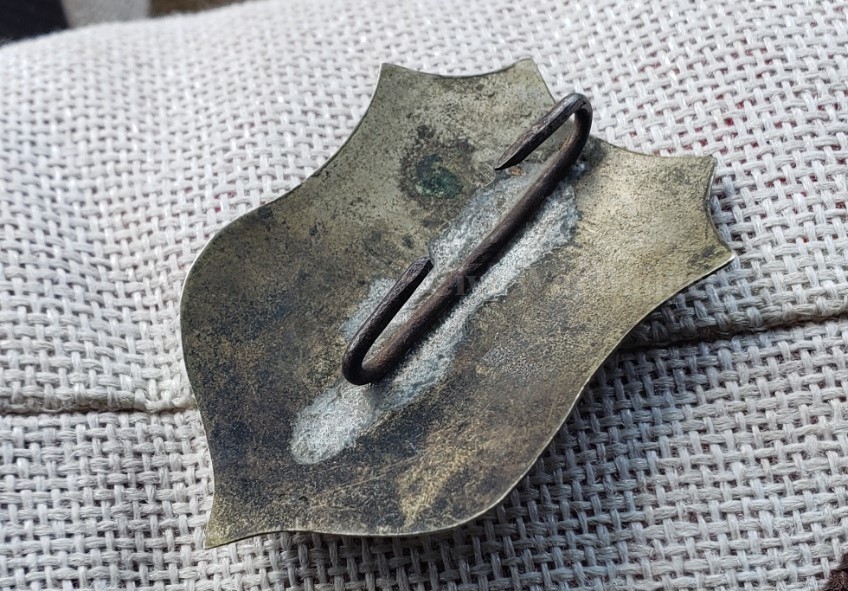 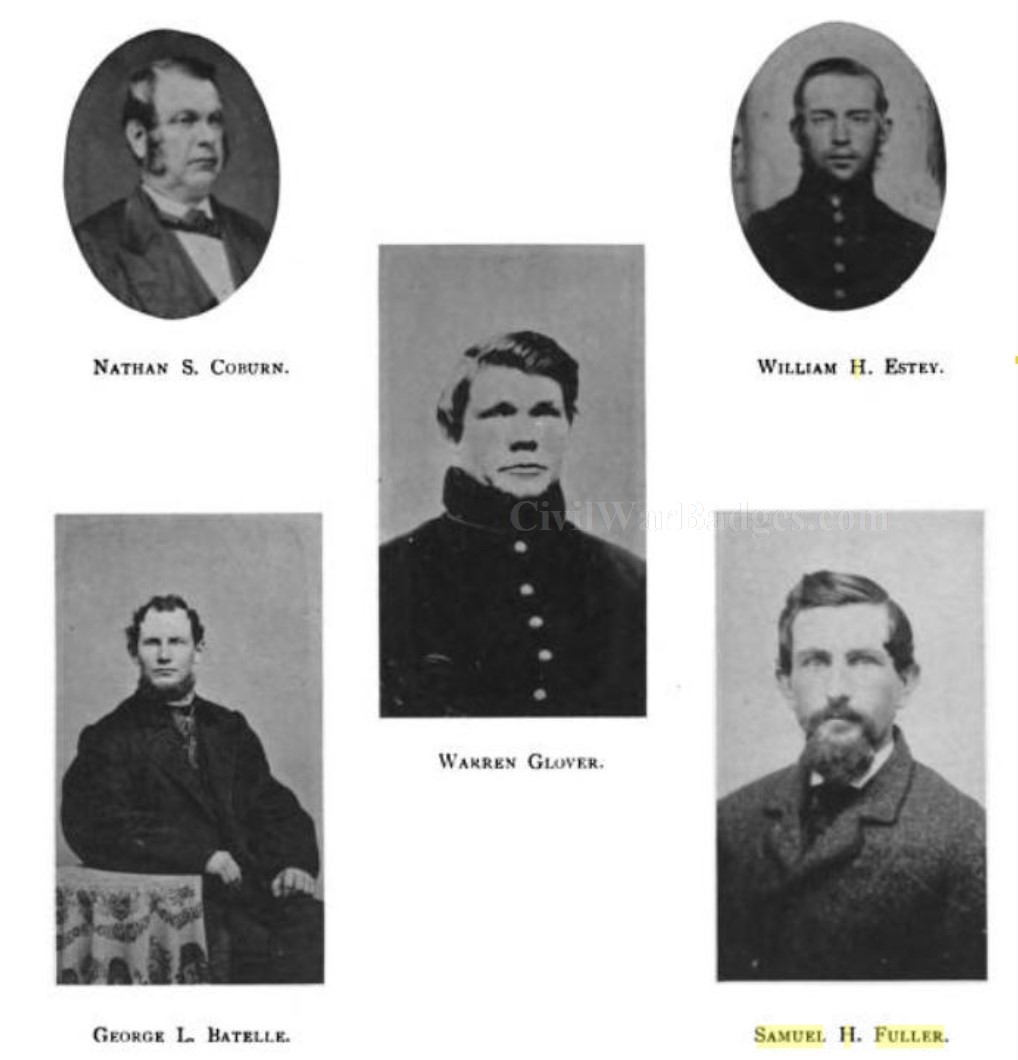 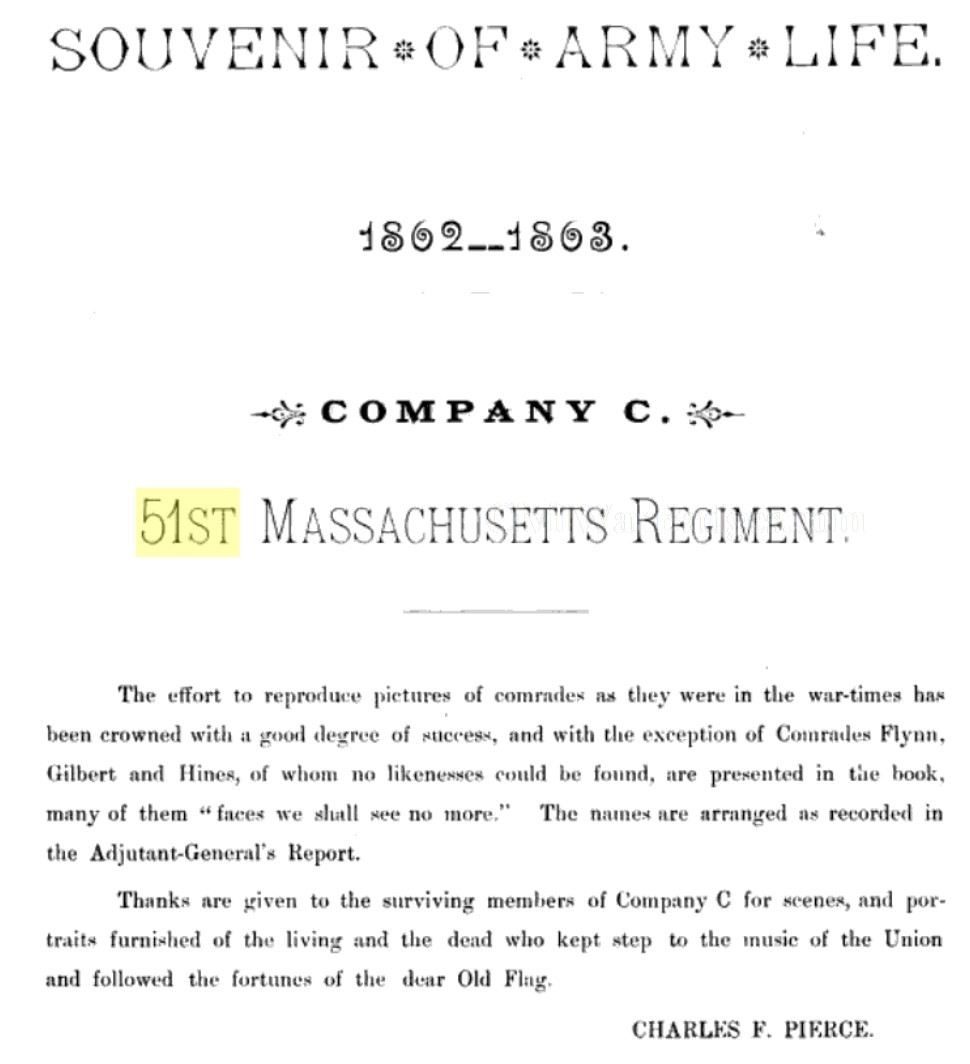 LARGE DBL-POINTED PIN ON REVERSE ~ PROBABLY PINNED DIRECTLY TO UNIFORM/HAT OR EVEN MADE TO FIT ON
LEATHER
I was able to find a picture (google search) of Fuller from a book titled~ Souvenir of Army Life. 1862-1863. Company C. 51st Massachusetts Regiment....
it is pictured above

The 51st Regt. Mass. Vol. Mil. was raised largely in southern Worcester County as a part of Massachusetts' quota of nine months troops. Its rendezvous was Camp Wool, Worcester, Mass., where the recruits gathered in the early fall of 1862, Col. George H. Ward of the 15th Mass. Regt., who had lost a leg at Ball's Bluff, being commandant of the camp. The companies of the 51st were mustered in between the 25th of September and the 14th of October. A. B. R. Sprague, an officer of the 25th Mass. Inf., was commissioned colonel, and under his command the regiment left Camp Wool, Nov. 25, 1862, proceeding by rail to Boston, where it immediately embarked on the transport MERRIMAC bound for North Carolina.
After a rough voyage it reached Beaufort, N. C., Nov. 30, proceeding thence by rail to Newbern. Here it was assigned to Amory's Brigade. Not until Dec. 5 were arms issued to the regiment and the men instructed in their use. On Dec 11, the 51st was assigned to the Goldsboro expedition. Proceeding with it as far as Beaver Creek Bridge, it was delayed there to guard the crossing at that important point. Continuing on after the main body on Sunday the 14th, it overtook the column Tuesday the 16th while it was engaged in the battle of Whitehall. During the battle of Goldsboro, Dec. 17, the 51st guarded the wagon train and was not in action. It returned to its barracks on the Trent River near Newbern on Sunday the 21st. Company "G" was sent to Brice's Ferry, Dec. 30, to do guard and outpost duty, and there remained during the entire period of the regiment's service in North Carolina. On Jany. 17, 1863, seven companies took part in an expedition to Pollocksville, five of them proceeding as far as Young's Cross Roads, and having a skirmish with the enemy at White Oak Creek, returning to Newbern, Jany. 21. During the month of February the regiment suffered much from the ravages of disease and especially from an epidemic of cerebro-spinal meningitis, a number of men dying of the latter disease. Early in March several companies of the regiment were distributed at various points along the railroad between Newbern and Morehead City, while others were stationed at Beaufort and Evans' Mills, Colonel Sprague being assigned to the command of the District of Beaufort, which included Fort Macon. Company " C " became a part of the garrison of this fort. On May 4, the regiment returned to Newbern much improved in health, and reoccupied its old camp on the Trent River. On June 24, 1863, the 51st was ordered to Fort Monroe. Arriving at this place on the 27th, it was ordered to report to General Dix at White House where a force was being collected to attack Richmond. Arriving at White House, June 28, it was almost immediately ordered back to Fort Monroe. Here the colonel offered the services of the regiment for emergency duty until the Confederate army under General Lee should be driven back from Pennsylvania, and it was immediately transferred to Baltimore, Md., where it remained from July 1 to July 6, searching houses for concealed arms, guarding prisoners from Gettysburg, etc. On the date last mentioned it was attached to a provisional brigade under Brig. Genl. H. S. Briggs, the other regiments being the 8th, 39th, and 46th Massachusetts. Proceeding to Sandy Hook, Maryland Heights, and Fort Duncan, opposite Harper's Ferry, it remained at the latter place until July 12 when it started for Funkstown, Md., in front of the Confederate position at Williamsport, and here on the following day it joined the 1st Corps, Army of the Potomac. The night following its arrival, the Confederate army recrossed the Potomac. On the 15th the regiment was sent with the 1st Corps to Berlin, Md., where the Union army was preparing to cross the Potomac in pursuit of Lee. Here the 51st was detached from the corps and ordered to Massachusetts for muster out. Arriving at Worcester, Mass., July 21, the men were furloughed for six days, after which they reassembled and were mustered out of the service July 27, 1863.