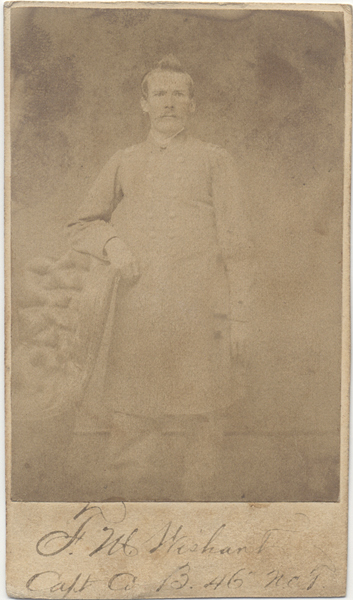 Grant's next stop was Chicago for his reunion with the Army of the Tennessee, where General W. T. Sherman and some 80,000 veterans were waiting to receive him. Here Grant would soon be introduced to the famous contemporary author Mark Twain.[112] Arriving in Chicago in mid-November, the Grants once again were greeted with celebrations despite rainy weather. A huge and grand parade followed, with the Grants in front in a special horse-drawn carriage, surrounded by bodyguards consisting of officers who once served under Grant. Philip Sheridan, acting as Grand Marshal, mounted on an old warhorse, lead the entire parade, which included 3,000 veterans and 15,000 civilians.[113]The reception and reunion was given by the Society of the Army of the Tennessee, to "General Grant", and took place at Haverly's Theatre.[114] The grand reunion was held and after a salute and review to the Army of the Tennessee, Grant was formally welcomed by Chicago's Mayor Harrison, who addressed Grant and spoke in the rotunda of the Palmer House. A formal dinner honoring Grant followed, with more than a dozen speakers, including its last speaker, Mark Twain, making homages and offering toasts. Twain later said of Grant during the speaking that he came away astonished by Grant's ability to remain calm for the duration of all the adulation. I.e. "He never moved ... for a single instant."[115]While in Chicago Grant took time to meet with a black delegation and expressed his assurances "that all the rights of citizenship may be enjoyed by them as it is guaranteed to them already by the law and constitutional amendments". Leaving Chicago, Grant continued his home-coming journey across the country, traveling in a privately owned railroad car that was custom-made by the noted engineer George Pullman.