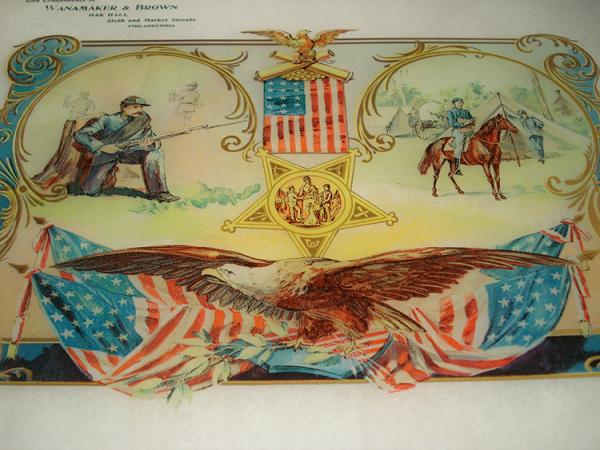 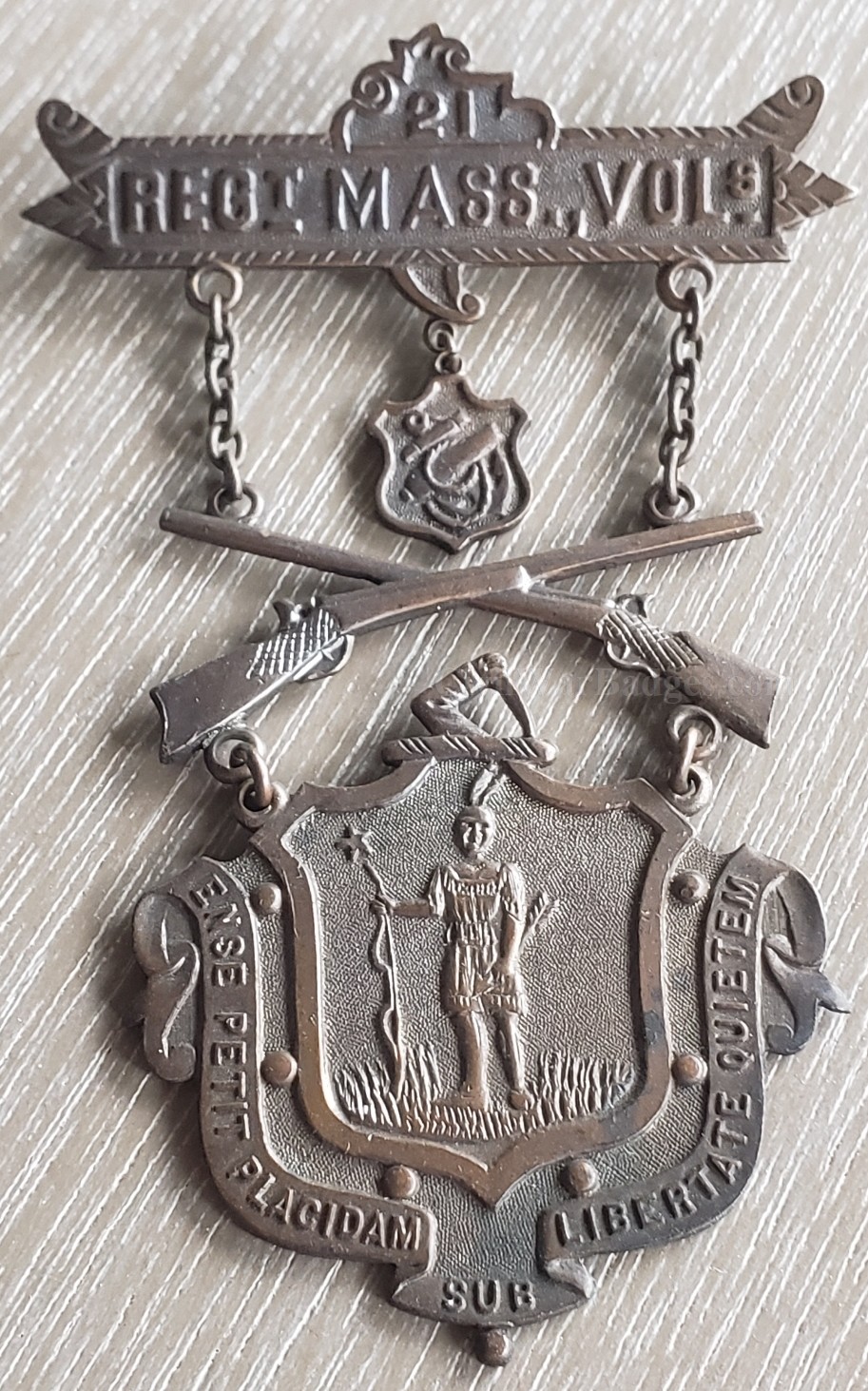 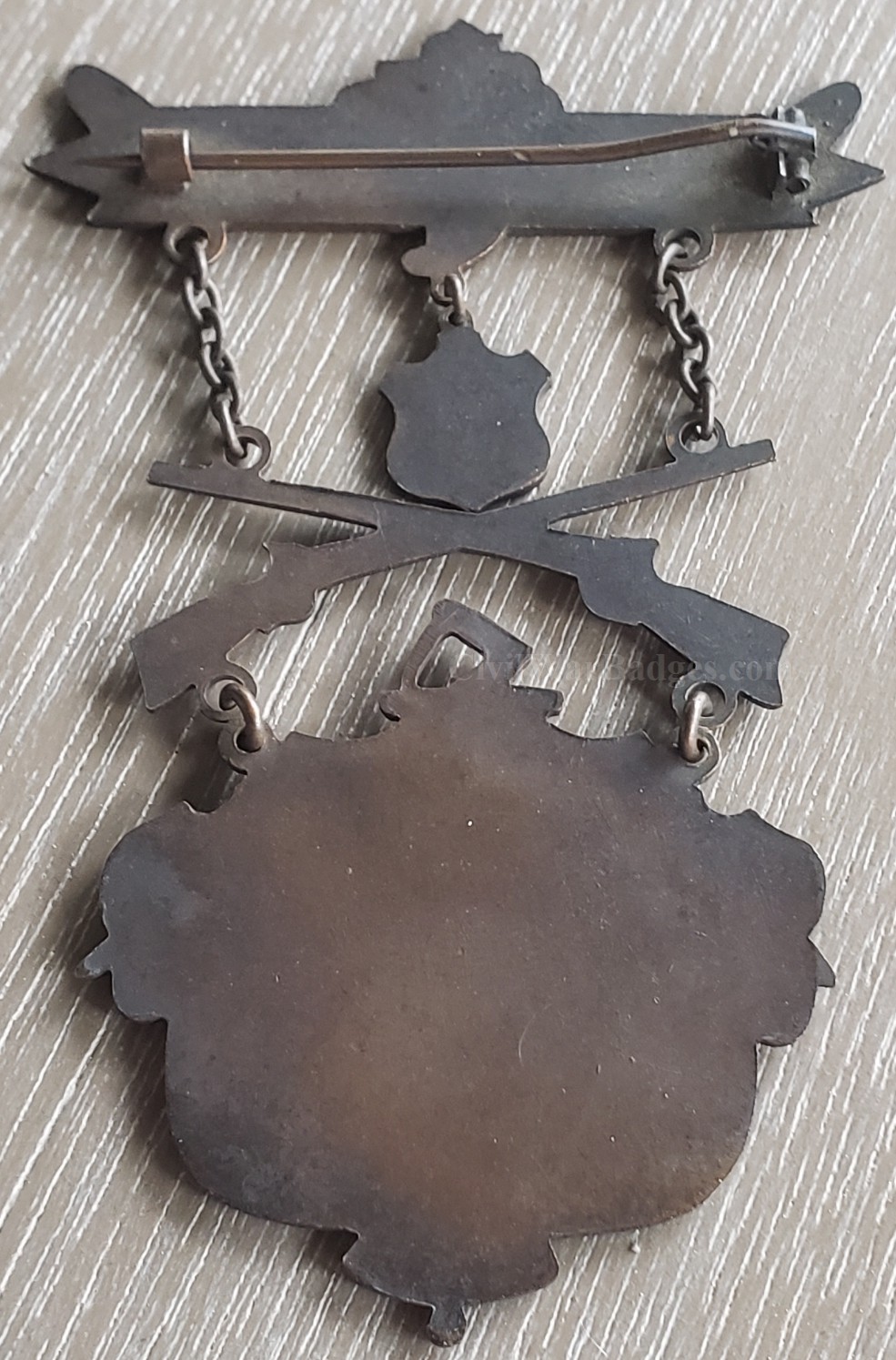 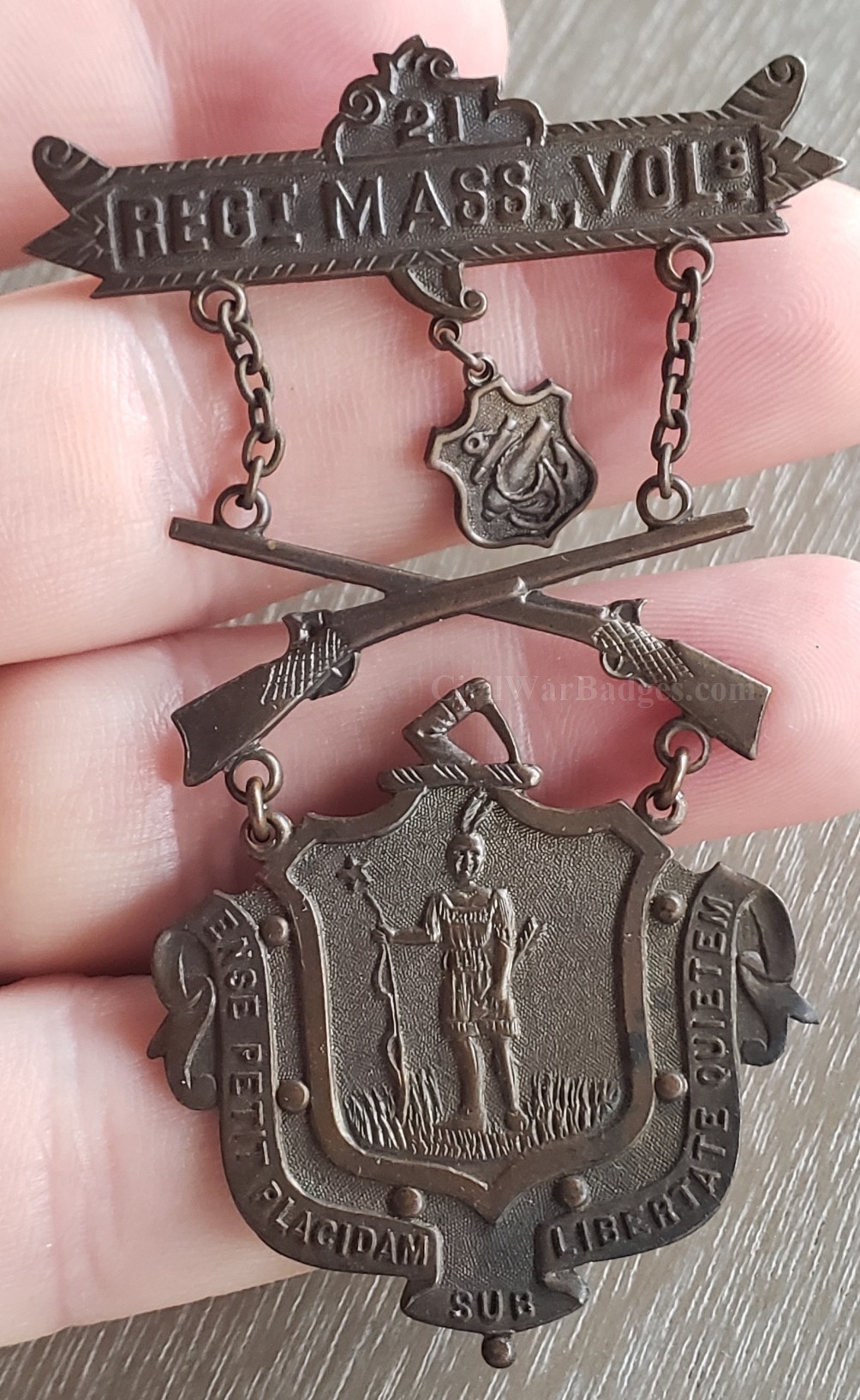 Click on an image to enlarge
3" IN HEIGHT ~
The 21st Regt. Mass. Vol. Inf. was made up of companies raised in the central and western part of the State in the summer of 1861. It rendezvoused at Camp Lincoln, Worcester, Mass., Companies A; D, and G arriving in camp July 19 and being mustered in to date from that day. The rest of the regiment was mustered in on or before August 23. Its first colonel was Augustus Morse of Leominster, who had been major general of the old 3d Division, Mass. Vol. Mil. On August 23 the regiment marched to the city hall, where it was presented with a national flag by the ladies of the city of Worcester, after which it entrained to Norwich, Conn., on its way to the seat of war. A week later it arrived at Annapolis, Md., remaining in that vicinity until Jan. 9, 1862, when it was assigned to the Burnside expedition to North Carolina. Under command of Lieut. Col. Alberto C. Maggi it formed a part of Reno's Brigade of Burnside's Coast Division, Army of the Potomac. It was engaged in the battles of Roanoke Island, Feb. 8, Newbern, Mar. 14, and Camden, April 19, losing in these three actions in North Carolina 40 officers and men killed or mortally wounded. On August 5, 1862, the regiment re-embarked and three days later reached Newport News, Va., where it became a part of Ferrero's Brigade, Reno's Division, Burnside's (9th) Corps. As such it was sent to reinforce Gen. Pope's army near Culpepper. It was present at 2d Bull Run, Aug. 30, suffering slight loss, but at Chantilly, Sept. 1, it was heavily engaged and lost 38 men killed or mortally wounded. At South Mountain, Sept. 14, Gen. Sturgis being in command of the division and Gen. Reno of the corps, the 21st was engaged near Fox's Gap. At Antietam, Sept. 17, it helped to carry the Burnside Bridge and lost heavily. At Fredericksburg, Dec. 13, it participated in the assaults, suffering severe losses. Here the color bearer, Thomas Plunkett, lost both his arms. On Feb. 9, 1863, the regiment left its camp at Falmouth and accompanied the 9th Corps into Kentucky, being stationed at Mount Stirling, Lexington, Nicholasville, Camp Nelson, and other places. Here it became a part of the 1st Brigade of the 2d Division and as such took part in the defense of Knoxville, Tenn., against Longstreet's siege and assaults, Nov. 17 to Dec. 4, 1863. The siege being raised, on the 26th and 27th of December, 1863, when but two ears of corn a day were being issued as rations, the question of re-enlistment was proposed. Between Dec. 29, and Jany. 1, 251 out of the 287 men in the regiment re-enlisted at Blain's Cross Roads, and were mustered in at Covington, Ky., to date from Jany. 1, 1864. The regiment then proceeded via Camp Nelson, Nicholasville, and Covington, Ky., to Cincinnati, Ohio, where on Jany. 29, the re-enlisted men entrained for Massachusetts to enjoy a veteran furlough of 30 days which was finally extended to about seven weeks. On March 20, 1864, the veteran 21st again assembled at Annapolis, Md., its old rendezvous in the early winter of 1861- 62. In the reorganization of the 9th Corps the 21st, now under Lieut. Col. George P. Hawkes, was made a part of Leasure's (2d) Brigade, Stevenson's (1st) Division. The regiment, now numbering only 209 men, was engaged at the Wilderness, May 6, at Spottsylvania, May 12 and 18, on the Shady Grove Church Road, May 31, and June 1, and at Bethesda Church (near Cold Harbor), June 2, losing in the campaign 24 in killed and mortally wounded. Transferred to the front of Petersburg it was in the assault of June 17, and in the Crater fight on July 30. August 18, the officers and men whose time was out left for home, and the regiment was reduced to a battalion of three companies under Capt. Orange S. Sampson. At Weldon Railroad, Aug. 19, and at Poplar Spring Church, Sept. 30, the battalion was engaged with loss, Capt. Sampson being killed Sept. 30. This was its last battle as a separate unit. By General Order of Oct. 21, 1864, the three companies of the 21st Battalion were consolidated with the seven companies to which the 36th Regt. had been reduced and served with that regiment until the close of its term. The men whose time had not then expired were transferred to the 56th Regt. and mustered out with that regiment, July 12, 1865.
Shipping Weight: 0.6 lb
$475.00 USD