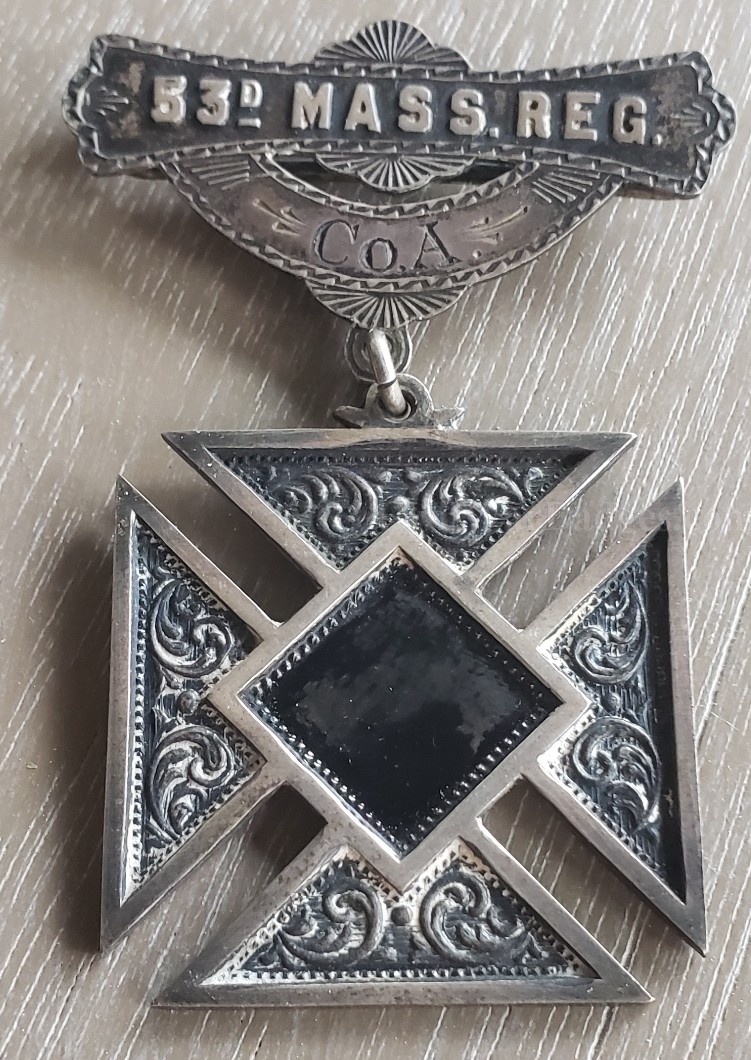 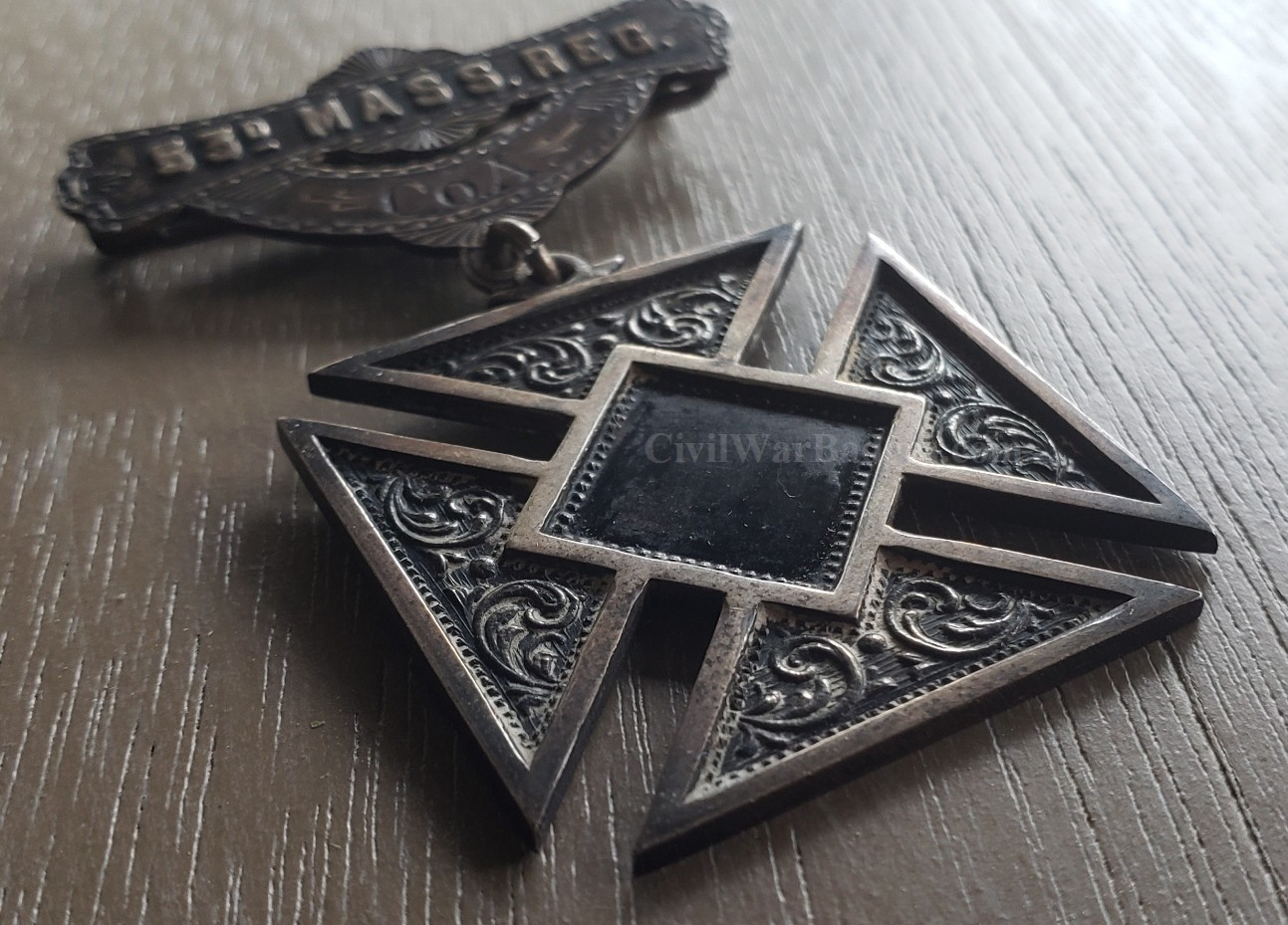 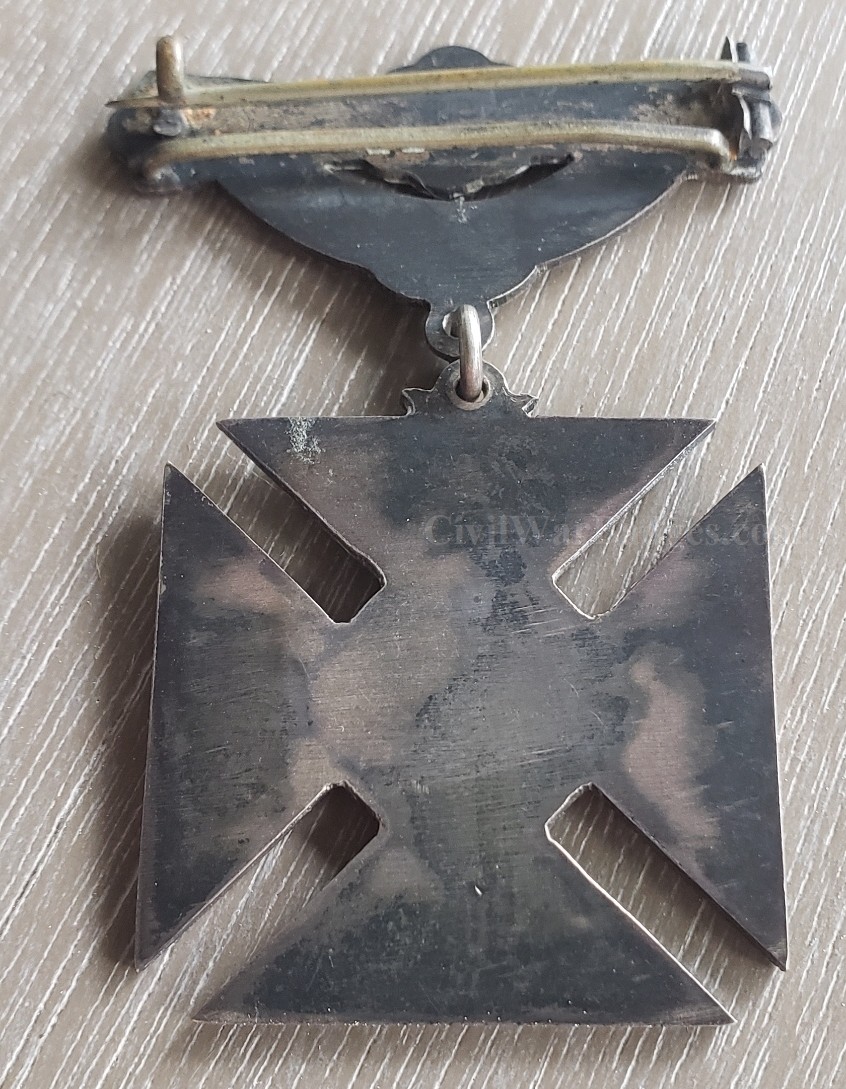 Click on an image to enlarge
2.5" IN HEIGHT AND VERY ATTRACTIVE IN HAND ~ NO BACKING RIBBON

WORN BY A MEMBER OF CO.A
The 53d Regt. Mass. Vol. Mil. was made up of men coming largely from northern Worcester County, one company, however, being recruited in the adjoining towns of Middlesex County. It is the last in the list of Massachusetts regiments raised in response to the call of August 4, 1862, for nine months' troops. Its rendezvous was at Camp Stevens, Groton Junction, and the commandant of the camp was Capt. Wesley C. Sawyer. All the companies except Co. "C" were mustered in on the 17th and 18th of October, and Co. " C " on the 6th of November. On Nov. 29, 1862, the regiment, now under the command of Lieut. Col. George H. Barrett, left for New York, and rendezvoused first at Camp Banks, Long Island, where the expedition to Louisiana was being organized. Soon, however, it was transferred to more comfortable quarters at Franklin Street Barracks, New York City, where it remained until it left for the seat of war. On Jany. 17, 1863, the regiment embarked on the steamer CONTINENTAL bound for New Orleans. This city was reached Jany. 29, and the regiment went into camp at Carrollton. Here it was assigned to Gooding's (3d) Brigade, Paine's (3d) Division, 19th Corps, the 31st and 38th Massachusetts being in the same brigade. The regiment was sent by steamer to Baton Rouge, March 6, to join the force which was being assembled for operations against Port Hudson. About the middle of March it proceeded with the rest of the division toward Port Hudson to cooperate with Admiral Farragut in his attempt to pass the batteries with his fleet. Returning to Baton Rouge,March 20, on the 1st of April it was sent by steamer to Algiers, opposite New Orleans, where troops were being assembled for the Teche expedition. Here, on April 9, it entrained for Brashear City, pushing on thence to Fort Bisland. Here on the 13th it was engaged with the enemy, losing three men killed, including Lieutenant Nutting, and eleven wounded. Following in pursuit of the enemy, it reached Opelousas, April 20, remaining here until May 5, when it started for Alexandria on the Red River. In a forced march of four days it covered the distance of fully 100 miles, and arrived in Alexandria on the evening of May 8. Here they found a Union fleet in possession of the town. Resting here for ten days, the regiment began its return march, proceeding, however, by a different route which would bring them to Bayou Sara on the Mississippi above Port Hudson. Simmsport on Bayou Alabama was reached May 18. Here the 53d3d remained four days, embarking for Bayou Sara, May 22, and rejoining the brigade next day. On May 24 and 25 in the advance on Port Hudson it was near the head of the column guarding the engineer corps. In the assault on the Confederate works, May 27, the 53d was engaged, but with slight loss. During the early days of June it performed especially hazardous duty in the front line of trenches, losing two killed and three wounded. On the 5th it was sent with an expedition to Clinton about 25 miles to the northeast to drive away a body of Confederate cavalry, returning on the 8th to its position in the trenches before Port Hudson. The 53d participated in the assault of June 14, being heavily engaged, and losing 18 killed or fatally injured, and over 68 wounded, Lieutenant Grover being among the former. The regiment now remained in front of Port Hudson until its surrender, July 9. Two days later it started for Baton Rouge, arriving at that place on the 12th. On the 15th it was transported to Donaldsonville, where it remained in camp until Aug. 2, when it returned to Baton Rouge. Ten days later it embarked on the steamer METEOR for Cairo, arriving Aug. 19, and there taking train for Massachusetts. Fitchburg was reached Aug. 24. Here the men were given an enthusiastic reception and furloughed to reassemble at Camp Stevens, Aug. 31, where on the 2d of Sept. they were honorably mustered out of the United States service. Out of the 950 officers and men who had gone out with the regiment, 33 had been killed or mortally wounded, while 133 had died of disease, nearly 18 per cent of its entire enrollment, this being the largest number of lives lost by any nine months' regiment.
Shipping Weight: 0.6 lb
$650.00 USD