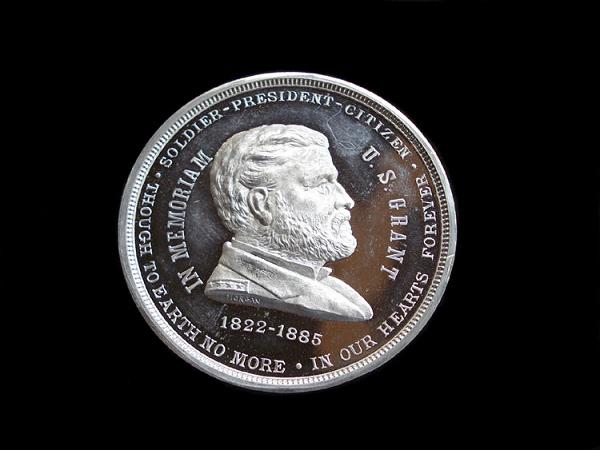 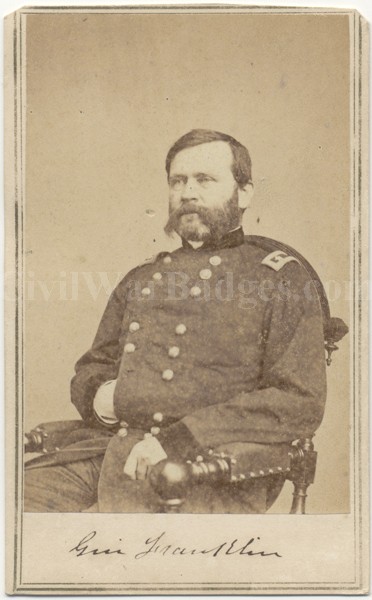 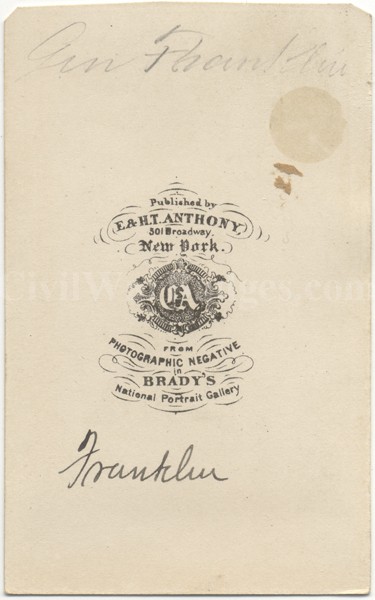 Franklin, William B., major-general, was born in York, Pa.
Feb. 27, 1823, and was graduated at the United States military
academy at West Point, first in his class, in 1843. He served
in the Mexican war as topographical engineer under Gen. Taylor,
and so distinguished himself at the battle of Buena Vista as to
win promotion to the brevet rank of 1st lieutenant. In the
years between the Mexican war and the Civil war he was employed
on topographical duty on the frontier, as engineer-secretary of
the light-house board, assistant professor of engineering at
West Point and supervising engineer in the construction of ad-
ditions to the national capitol and in the erection of the
treasury and post office buildings in Washington, D. C., rising
in this interval also to the rank of captain, July 1, 1857.
When the Civil war broke out he was promoted colonel of the
12th infantry, May 14, 1861, brigadier-general of volunteers,
May 17, 1861, and major-general of volunteers, July 4, 1862.
Gen. Franklin's first service in the volunteer army was at Bull
Run, July 21, 1861, when he commanded a brigade and engaged in
the heaviest fighting of the day around the Henry house. He
received a division on the organization of the Army of the Po-
tomac. and when the 6th army corps was formed became its com-
mander, continuing as such throughout the year 1862. He was in
almost all the battles of the Peninsula, engaging at Yorktown,
West Point, White Oak bridge, Savage Station, Malvern hill and
Harrison's landing, and, after his return to Maryland with the
army, commanded the left of the army at Crampton's gap, South
mountain, Sept. 14, 1862, and engaged in the battle of Antietam
three days later. At the battle of Fredericksburg he commanded
the left grand division under Burnside. Gen. Burnside, by com-
plaining that Franklin did not obey orders in this battle
caused the latter to be sharply censured by the Congressional
committee on the conduct of the war, and he was also removed
from his command for insubordination. The failure of the
president to approve the order of removal led to Burnside's
resignation of his command. After several months on waiting
orders Gen. Franklin returned to duty in July, 1863, and on
Aug. 15, was assigned to command the 19th army corps, which he
directed under Banks in the Red River expedition of 1864. He
was wounded at the battle of Sabine crossroads, April 8, 1864,
and was on sick leave until Dec. 2, 1864, when he was placed on
duty as president of the retiring board at Wilmington, Del., in
which capacity he served until Nov. 9, 1865. During his leave,
while still an invalid, he was captured by Confederate raiders
while riding on a train of the Baltimore & Philadelphia road,
but made his escape the same night. He was given the brevet
rank of brigadier-general, June 30, 1862, for gallant and meri-
torious service in the battles before Richmond, and brevet ma-
jor-general U. S. A. March 13, 1865 for gallant and meritori-
ous services in the field during the war. He resigned from the
regular army March 15, 1866, as colonel of the 12th infantry.
He was adjutant-general of Connecticut 1877-78, was for several
years president of the board of managers for the National home
for disabled soldiers, and was interested in the manufacture of
fire arms and a director of three insurance companies. Gen.
Franklin died March 8, 1903.