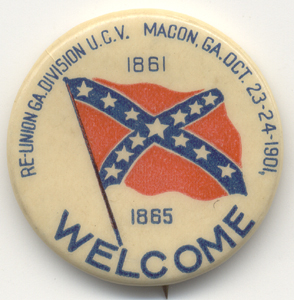 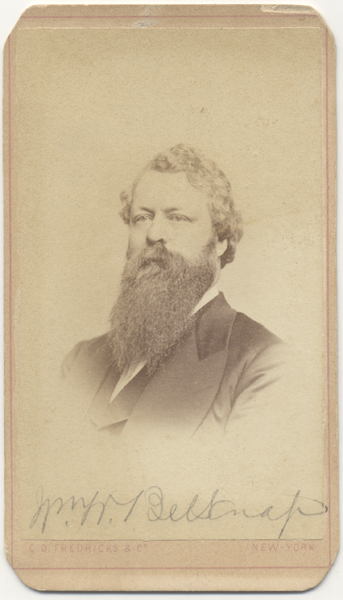 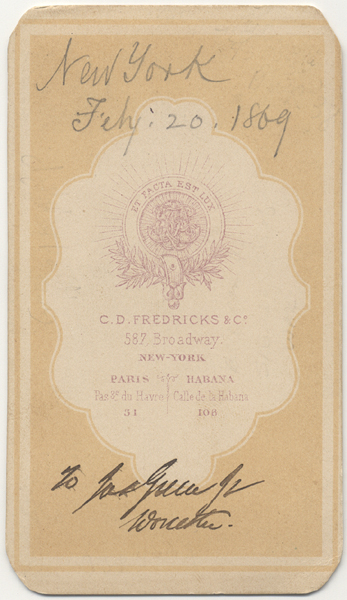 Click on an image to enlarge
by photographer C.D. Fredricks & Co. / New York;
Autographed in pencil "Wm. W. Belknap" on obverse.
On reverse what also appears in his hand, "New York /
Feby. 20, 1869". He was Secretary of War when this was signed.
In ink on reverse bottom by unknown hand : "To Jas Green Jr /
Worcester".
Belknap, William W., brigadier-general, was born in
Newburgh, N. Y., Sept. 22, 1829. In 1848 he was graduated
from Princeton university, afterwards studied law, and in 1851
moved to Keokuk, Ia., to practice his profession. While
residing there he was elected, in 1857 as a Democrat, to the
state legislature. When the Civil war broke out he joined the
Union forces as major of the 15th Iowa volunteers, fought at
Shiloh, Corinth and Vicksburg, and distinguished himself
during Sherman's Atlanta campaign. He was promoted to
brigadier-general on July 30, 1864, and on March 13, 1865, was
given the brevet rank of major-general of volunteers. After
the war he was collector of internal revenue from 1865 to
1869, when he was appointed secretary of war. He held this
office during the entire administration of Gen. Grant until
March 7, 1876, when, on account of charges of official
corruption, he resigned. He was impeached on charges of
accepting bribes, but, as his resignation took effect before
the trial was actually begun, the proceedings were dropped for
lack of jurisdiction. He died in 1890.
Promotions